Jeffrey Pfeffer is considered one of the world’s most influential management thinkers. He is the author of several best-selling books and a Professor of Organisational Behaviour at the Graduate School of Business, Stanford University.

Ahead of his visit to Australia for our ‘Fire Up The Future’ program, we caught up with Jeffrey Pfeffer around his incredible career, defining moments, and who has had the greatest impact on him professionally.

Could you tell us about your early career and some of the moments that have defined you professionally?

In 1979, at the age of 32, I was appointed Full Professor at the Graduate School of Business, Stanford University, a position I have held ever since and one that fulfilled my career dreams and ambitions. There were three defining moments that shaped my career. The first came when I was in the business administration master’s program at Carnegie Mellon University and Alan Weinstein, a faculty member, gave a talk about career prospects and the realities of corporate life. After he was finished, it was clear that the path to the top in corporate America was going to be (given various personal characteristics) both unlikely and unpleasant. I needed to reorient where I thought I was going. Then, having graduated at the height of the Vietnam war, I went to work for the Research Analysis Corporation, a military-oriented think tank and soon discovered that even ostensibly interesting work (I worked on a military manpower planning project that provided the number of people to be drafted each month) was, to me, not sufficiently intellectually engaging. So I decided to go back to school to get a Ph.D.as a way of finding something interesting to do where I had a better chance of success.

The third, and possibly most defining, career moment came as I graduated from Stanford’s doctoral program. I did a thesis that developed something called resource dependence theory. At the time of my graduation, the topic and my approach was too different from mainstream organisational research. So, after being interviewed by the best schools including Harvard, Yale, and Northwestern, I wound up with offers only at Illinois, Florida, and Oregon. Richard Hoffman of the University of Chicago was the last person to call and turn me down. He told me I had a choice: to do what the field thought I should do—to do work that would fit in—or to pursue what I thought was theoretically important. I replied that I really didn’t have a choice at all, when phrased in that manner. Seven years later I would become one of the youngest full professors at Stanford based on the same research that had delimited my job prospects—a piece of research that is now considered foundational in the field.

What personal attributes do you think have made you so successful?

The personal attributes that made me successful both emerged from and contributed to the sequence of events just described: field independence (a nice way of saying that I often am insufficiently concerned with what other people think), persistence and resilience in the face of setbacks, being unafraid to take on big challenges—being intellectually and theoretically ambitious—and impatience. Like many things, these qualities are both strengths and weaknesses. In academia, one is rewarded for being innovative although, as the philosopher of science, Thomas Kuhn, perceptively noted, much of academic life is oriented toward maintaining established paradigms rather than encouraging new ideas. Most if not all of my most cited research—and I have now surpassed 100,000 citations according to Google scholar—had difficulty getting published and was often, therefore, not placed in the “best” journals. In order to forge my own path, I had to be willing to take rejection, keep working, be ambitious about the questions I have sought to answer, and not to waste time.

Who do you think has had the greatest impact on your career?

The person with the greatest impact on my career was Gerald R. Salancik who, sadly, died in his early 50’s in 1996. I met Jerry at the University of Illinois, my first academic position. Salancik, a graduate of Yale’s social psychology department, began at Illinois the same year I did. He shared many of my personal traits. He was iconoclastic, insightful, and driven. Most importantly, he and I worked together on some field-defining research projects, including my first empirical research on power. He was a joy to be around and loved what he did. Salancik taught me so much about theory and methods—probably more than I learned in my doctoral program. It was he who saw how to make my dissertation into a book and his collaboration on The External Control of Organizations was probably the defining event in my career.

Where do you get your energy from?

I get my energy from a deep, abiding sense of the many injustices in the world as well as from an unrelenting reserve of curiosity about how the world works to create and even perpetuate unfairness. I use that energy to take on more writing and research than I probably should and mostly to keep engaged in multiple ways with the world of ideas, as a columnist, book author, and even to this day, a publisher of manuscripts in peer-reviewed academic journals. 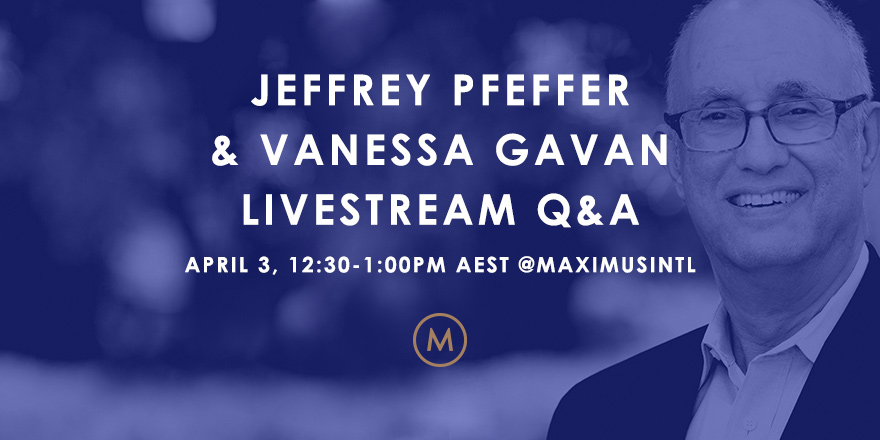